The configuration of the embankments

With regard to the internal morphology of the walls, the information and sources available are quite limited. On the basis of some fragmentary indications deduced from documents from the time of construction, it is, however, reasonable to assume that the embankments had a structure similar to the current one, although with a more defined modelling of the land and more functional to the defensive needs of the structure. In particular, inside the masonry parapet, there must have been a flat space for the positioning of the defenders, beyond which they developed the real escarpments. In the graft points between bastions and curtain walls they managed to fit lowered gun emplacements to shield the curtain walls, in line with the indications of the Renaissance military treatises.

This structure is confirmed by a 1564 letter from the captain of the guard Bartolomeo Mazzocco, addressed to the duke Vespasiano, in which there is reference to the imminent completion of the curtain wall and the subsequent filling of the area behind the embankments. The author also states that “il baluardo di Santa Maria è finito con il suo parapeto di dieci braza no l’ò voluto fare maggiore per non stringere tanto la piaza” ("the bastion of Santa Maria is finished and it is ten arms high because it didn't want it to make the square look smaller ").1. "Parapeto" was the dock behind the parapet itself, a band five to six meters wide, where the soldier could move, protect himself and recharge the artillery. The "piaza" was instead the area located at the points of connection between the ramparts and the curtain walls, or rather the area where the pieces of artillery were placed for the protection of the straight stretches.

As stated in the Chronicle of Dondi, in April 1589 poplar trees were planted on the embankment of Porta Vittoria in order to consolidate its slopes2. The draft of an edict from 1585, written by Giorgio Zanichelli (commissioner of the ducal factories of Sabbioneta) also documents that the inhabitants were obliged to integrate the missing trees3. 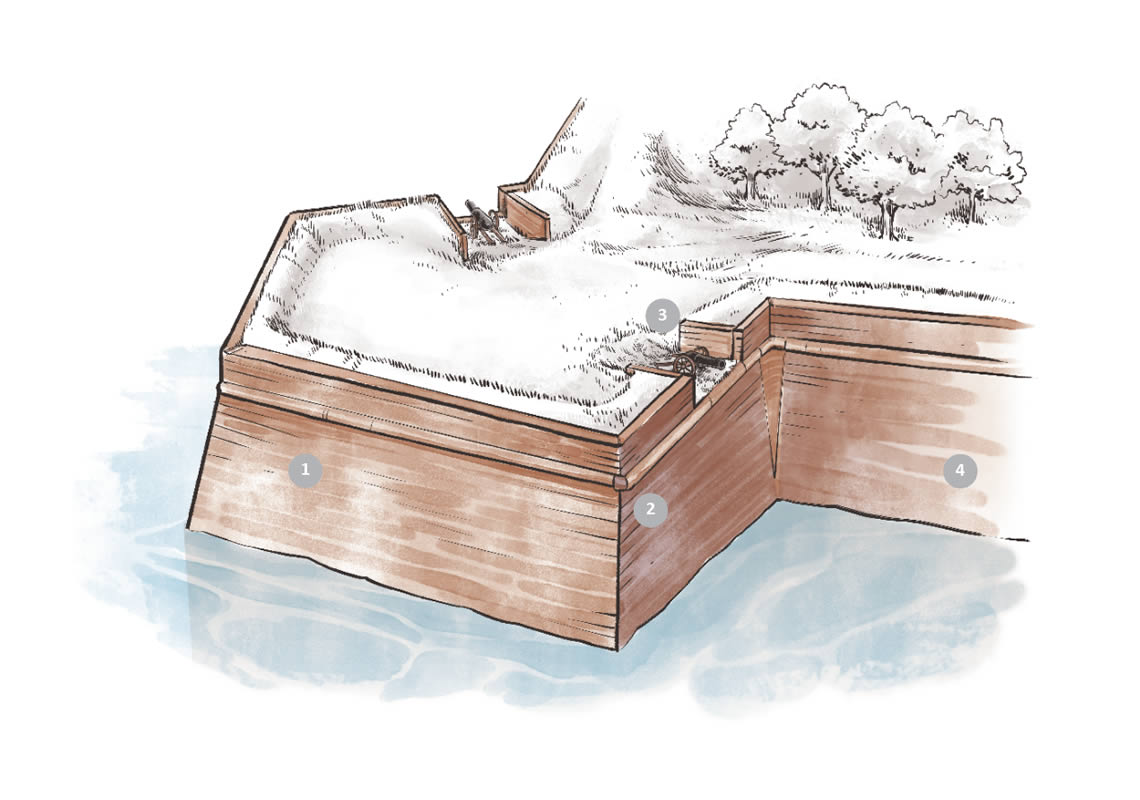 In regards to the subsequent evolution of the embankments, in the absence of a specific thematic historical cartography, reference can be made to the design interventions for which documentation has been preserved, to the historical land registers and to the photo-interpretation of the flights carried out by the Military Geographic Institute (IGM).

The project for the demolition of the walls (drawn up in 1914) includes some representative sections of the embankments, used not to faithfully restore the status quo, but to calculate the earthworks necessary for the project. Despite these works, the sections still represent a landscape similar to the current one, with slopes that reach the edge of the walls both where the parapet has partially survived and where it is completely flattened.

Although they do not offer data on the altimetric conformation of the embankments, the historical cadastres that can be consulted at the State Archives of Mantua, through the respective registers of surveyed land parcels (estimation tables), allows to obtain information on the use of land in these areas from the mid-eighteenth century onwards. By that time the walls had lost all defensive function. The Theresian cadastre (1774) confirms that the embankments were then used primarily for agricultural purposes: in all cases a lawn with mulberry trees (morus). The surrounding moat, which was probably only partially filled, was instead used as pasture. The nineteenth-century cadastre (1854) does not offer indications on the use of land due to the unavailability of the register. The post-unification cadastre, consisting of a cartography surveyed in 1923 with updates until 1934 and which therefore offers information between the two wars, confirms the persistence of agricultural use, with mainly arboreal crops: especially vineyards and meadows - almost always wooded - on the bastions (the bastion San Giovanni is instead used as a vegetable garden), orchards (the Bresciani ramparts), mulberry trees (castle area, where a school was then built) and even meadows with trees. The land was gradually converted to vineyards towards the end of the twenties.

The cadastre of 1956 is in turn devoid of Register of surveyed land parcels, but there is evidence of agricultural use of the land along the embankments until 1954, thanks to DUSAF maps of the Lombardy Region, obtained through photo-interpretation and geo-referencing of aerial frames made by the IGM through the flight "G.A.I. - Aircraft Group Detector". At that time, some bastions had been converted into a park or garden (bastions of San Giovanni, San Giorgio, San Francesco), while others were still used for agricultural purposes: wooded (San Nicola) and simple (Santa Maria) arable land, orchard (Sant'Elmo). The area of the Bresciani ramparts was partly used as a permanent lawn and partly as wooded arable land. In the flat area at the foot of the bastion of Santa Maria, north of the old site of the castle, there is evidence of one last remaining vineyard.

Also based on the findings of archaeological campaigns carried out in 2018, it is likely that these agricultural uses, which existed until after the second world war, have led to the partial remodelling of the original structure of the embankments by up to almost one meter. This is specifically evident in  the obliteration of the quay behind the retaining railings, which gradually collapsed and was then partly reconstructed with subsequent restorations, along with the contextualized realization of the deposits visible today, which in almost all cases are configured as "bumps" over the edge of the existing masonry.